Halloween, one of the most popular American holiday, is fast approaching. It is associated with such spooky symbols as ghosts, zombies, skulls, bats, witches, black cats and many other scary motifs.

Creating Sin Reels, Promatic Group perfectly presents the atmosphere of Halloween. Sin Reels is a 5-reels slot game and its action takes place at the haunted graveyard. The goal of the game is to get a combination of the same symbols on at least one of the 10 paylines. All wins are calculated from left to right.

Move to the dark world of ghosts that ruled by the Death took over the graveyard. The Black Cat will show you the way to the beautiful Witch. Find her to create a spell that overcomes Death. 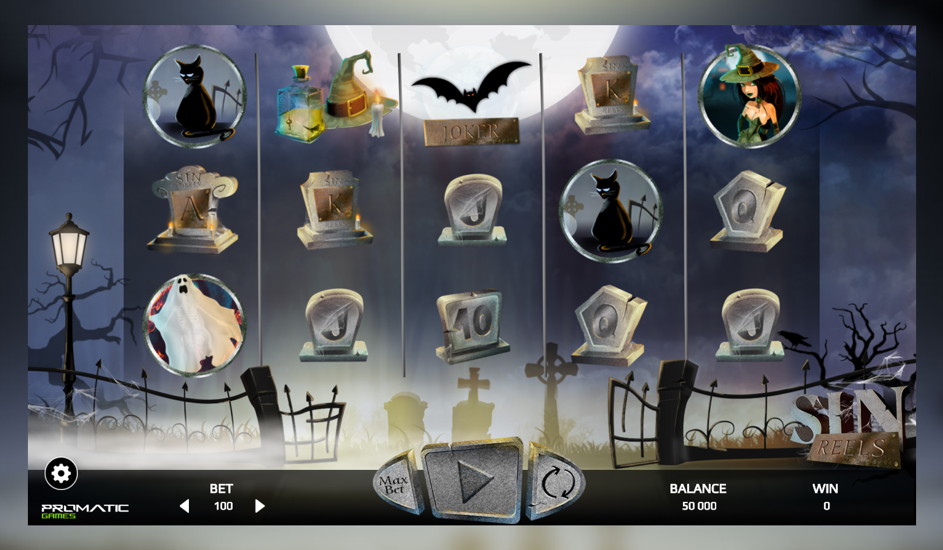 Horror-themed symbols are placed on 10 paylines. There are low symbols such as Witch, Ghost, Black Cat, Witch’s Attributes and two different Tombstones. The special symbols include: Scatter, Bat and Skull. Scatter Symbol in the game is represented by Death and her appearance, surprisingly, brings very good news – getting 3 or more Scatter Symbols trigger up to 20 Scatter Games. Special symbols also include Bat as the Joker, which replaces all symbols except bonus symbols, and Skull, which doubles all Scatter Games wins.

The demo version of the game is available at Promatic’s online games platform www.promaticgames.com. Join the game to have some spooktacular fun this Halloween!

This website uses cookies to improve your experience while you navigate through the website. Out of these cookies, the cookies that are categorized as necessary are stored on your browser as they are essential for the working of basic functionalities of the website. We also use third-party cookies that help us analyze and understand how you use this website. These cookies will be stored in your browser only with your consent. You also have the option to opt-out of these cookies. But opting out of some of these cookies may have an effect on your browsing experience.
Necessary Always Enabled
Necessary cookies are absolutely essential for the website to function properly. This category only includes cookies that ensures basic functionalities and security features of the website. These cookies do not store any personal information.
Non-necessary
Any cookies that may not be particularly necessary for the website to function and is used specifically to collect user personal data via analytics, ads, other embedded contents are termed as non-necessary cookies. It is mandatory to procure user consent prior to running these cookies on your website.
SAVE & ACCEPT